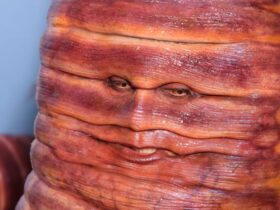 
Disneyland has announced a whole bunch of updates for its theme parks — not least of which the Avengers Campus multiverse expansion and details on the Princess and the Frog retheme of Splash Mountain — in California.

During Disney’s D23 Expo in Anaheim, California, Disneyland revealed that California Adventure‘s Pacific Wharf area, which is currently themed around San Francisco, will be rethemed as San Fransokyo from 2014’s Big Hero 6.

At San Fransokyo, you’ll be able to dine, shop and meet Baymax.

Situated between Cars Land and Pixar Pier, Pacific Wharf currently features a Ghirardelli chocolate shop, a Boudin Bakery and several quick-service dining and drinks locations. It also has a bridge that shakes very slightly to simulate a Californian earthquake, some photo op spots and a baby care center.

In changes coming to Disneyland, Jon Favreau was also on hand at D23 to announce that the Mandalorian carrying a Baby Yoda animatronic will begin appearing in Batuu, the Star Wars-themed land at Disneyland, starting in November.

“We’ve been working on this thing for years,” Favreau said.

In other Disneyland news, the Magic Happens parade — which debuted just weeks before the COVID-19 pandemic shut down the parks for over a year — will be returning next year. A new night-time spectacular for Disneyland was additionally announced, as well as a new World of Color show for California Adventure.

Also announced during the Disney Parks and Experiences Panel at D23 were the opening date for Tron Lightcycle Run at Disney World, the name of the next Disney cruise ship and a potential villains, Coco and Encanto area at Magic Kingdom.