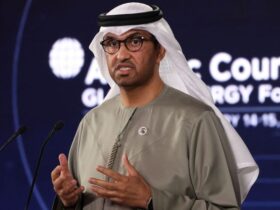 A major oil exporter is hosting a UN climate summit. Opinions are divided

Christian Horner has reiterated he is confident Red Bull stayed within Formula One’s budget cap rules last season as the FIA prepares to announce its conclusions following an investigation into whether the team exceeded the cap.

Sergio Pérez took a strong victory for the team in Singapore, while Verstappen could manage only seventh but remains on course to defend the drivers’ title at the next round which takes place this weekend in Japan.

As the teams travel to the next round, the FIA is assessing all the teams’ financial submissions and can impose penalties for a breach of the rules, which could potentially change the result of last year’s championship when Verstappen narrowly beat Lewis Hamilton.

The Mercedes team principal, Toto Wolff, had described it as an “open secret” in the paddock that two teams had overspent last year and that it gave them a material advantage that was unfair. After the race on Sunday however Horner repeated his belief that the team were well within the regulations.

When asked if he was nervous about the FIA ruling Horner was bullish. “No. We’re absolutely confident in our submission,” he said. “Our audit was signed off by our auditors. We believe we are comfortably within the cap.”

The rules identify two types of budget cap breach, those of under 5% considered minor and any spend above that which are considered a serious material breach. The penalties the governing body can impose for the latter include a deduction of points or exclusion from the championship.

Earlier in the weekend, Horner had described some of Wolff’s remarks as defamatory and threatened potential legal action, which he insisted still remained on the table.

“What I said on Saturday absolutely still stands,” he said. “We will consider all of our options. It was totally unacceptable to make a completely unfounded allegation – and on the basis of what knowledge? Where is this source of information?

“It was a confidential submission between the team and the FIA. I have no idea of the compliance of any of our rivals. So where does that information supposedly come from?”

Verstappen enjoys a 104-point championship lead over Ferrari’s Charles Leclerc and 106 points on his teammate Pérez. With five rounds remaining he will secure his second title if he is ahead of both drivers by 112 points after the race at Suzuka. A win will suffice if Leclerc finishes lower than second.