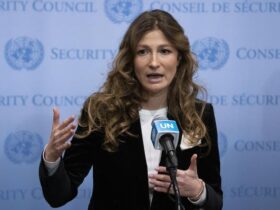 Club Brugge pulled off a shock 4-0 victory at FC Porto to win a second successive Champions League game and go top of Group B.

An early penalty converted by Ferran Jutgla was followed by two quick goals after half-time from Kamal Sowah and Andreas Skov Olsen before a late effort from teenage substitute Antonio Nusa put the seal on a massive upset.

The Belgian champions were worthy winners as they added an unexpected triumph to last week’s home success over Bayer Leverkusen.

Brugge moved to six points while Porto are bottom with no points.

The Belgians, who finished bottom of their group in last season’s campaign, went ahead after 15 minutes when João Mario brought down Jutgla and Brugge’s new Spanish signing picked himself up at the Estadio Dragão to convert the spot-kick.

Porto, who suffered a last-gasp loss at Atlético Madrid last week, looked out of sorts and failed to conjure up a response with their only real first-half chance falling to winger Pepe, whose effort was smothered by Simon Mignolet.

Two minutes into the second half Jutgla tried to dribble past a maze of defenders on the edge of Porto’s penalty area and, as the ball got away from him it fell fortuitously for Sowah to steer his way through and score from close range.

Porto’s defence had been caught napping by the quick thinking of the Ghanaian striker and were static again as Brugge went 3-0 ahead in the 52nd minute. Bjorn Meijer hit a low cross from the left that was allowed to go all the way through to the other side where an unmarked Skov Olsen was able to fire home under Diogo Costa.

Raphael Onyedika’s 86th minute effort came back off the upright but Brugge did get a fourth as Nusa, on his Champions League debut, ran clear of the defence to finish with a calmness that belied his 17 years.

Atlético were this time on the receiving end of a late show at Leverkusen in Group B. The Spanish side had struck twice in stoppage time to beat Porto last week but saw Robert Andrich and Moussa Diaby score in the final six minutes in Germany for a 2-0 win.

Edin Dzeko inspired Internazionale to a 2-0 victory at Viktoria Plzen. With Romelu Lukaku still sidelined with a thigh issue, Dzeko stepped up with a fine curled opener after 20 minutes and assisted Denzel Dumfries to wrap up the points in the 70th minute.

Bottom-of-the-table Plzen had already been reduced to 10 men by this point after Pavel Bucha received his marching orders on the hour mark.

Eintracht Frankfurt joined Spurs on three points in Group D after they claimed a 1-0 win in Marseille. Jesper Lindstrøm provided the breakthrough two minutes before the break and despite Mattéo Guendouzi and Cengiz Under coming on, the hosts suffered a second straight defeat in the competition.