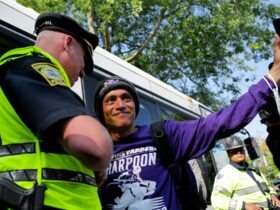 Election Misinformation in English Is Bad. In Other Languages, It’s Out of Control

Just one month ago, as the tennis tours swung to the North American hard court season at the beginning of August, Carlos Alcaraz was feeling burdened by his rapid success. The early stages of his rise had seemed so easy – he won big titles for fun, outperformed the likes of Novak Djokovic and Rafael Nadal, and the Spaniard flew up the rankings with a smile on his face. But now he was dealing with the baggage that accompanied his rise. The pressure and expectations, the shiny new target on his back.

While Alcaraz put on a brave face and rolled with the punches during those events, he spoke frankly as he sat with the US Open trophy by his side and looked back on the past few months. “I lost the joy a little bit,” he said. “I felt the pressure. I couldn’t smile on-court which I’m doing in every match, every tournament.”

The pressure he felt was reflected in his results. After taking numerous losses earlier in the summer to young players who were even more motivated to beat him, he fell in his first match in Montreal. In Cincinnati, he was outworked by Cameron Norrie in a tight quarter-final. He arrived in New York with the simple hope of recovering his joy: “I came here just to enjoy, you know? To smile on court, to enjoy playing tennis,” he said.

For Juan Carlos Ferrero, Alcaraz’s coach, a possible solution to regaining his sense of freedom and happiness was simply to execute the style of play that would most evoke those feelings. They spent the days before the US Open working on Alcaraz approaching the net as much as he could, pouncing on short balls and flitting into the forecourt.

It is a reflection of Alcaraz’s astounding, layered talents that he zoomed in on one facet of his style and used it to run through the tournament, win his first grand slam title and become the first ever teenage men’s No 1. During his 6-4, 2-6, 7-6 (1), 6-3 win over Casper Ruud in the final, he serve and volleyed 25 times alone. On the big points, Alcaraz had the clarity to continue moving forward, saving both set points in the pivotal third set with nerveless volleys.

As his rise has continued, the Spaniard has received countless comparisons to the recent greats, Nadal, Djokovic and Roger Federer, his idol. It is understandable on one hand – some small details of his style are reminiscent of some of the Big Three. They are the only legends he has known and he has naturally studied them throughout his development.

Such comparisons are also lazy. Alcaraz is his own player, following his own path, and the brand of tennis he plays is unique in its own right. The style he has built through the combination of his athleticism, high-octane shot-making, his seemingly endless skillset and his explosiveness around the court is unlike anything that we have ever seen, as is true of the legends before him.

With all that he has at his disposal, it is clear that Alcaraz has the ability to win many grand slam titles and establish himself as the dominant player of the next decade and more. But so much can happen over the course of a career – injuries, mental stagnation and even a great new rival. The landscape of tennis can quickly shift.

Any sustained success will rest on him continuing to evolve as a player, never falling into a comfort zone. He is already such a complete player, but he still has so much room to improve. Should he improve his serve and learn how to consistently hit his spots, for example, the rest of the world is in trouble.

For Alcaraz, the biggest surprise of this first title run has been the resilience he constantly called upon. In his fourth round match against Marin Cilic, he trailed by a break early in the fifth. As he and Jannik Sinner traded blows for five hours 15 minutes until 2.50am in the quarter-final, he faced a match point at 5-4 in the fourth set on Sinner’s serve. In the semi-final against Frances Tiafoe, the American reeled him back in multiple times. Each time he recovered and moved on.

During every tough moment on the court, Alcaraz repeats three simple words to himself – the three Cs: “Cabeza, corazon, cojones.” Head, heart and balls. His grandfather, Carlos Alcaraz Lerma, has repeated those words during every tournament since he was still just a child dreaming of future success. He has exemplified each quality in his career so far, and it has only just begun.