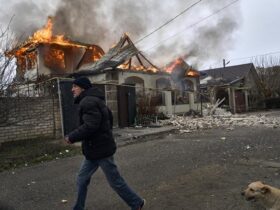 Here in the US, Crutchfield has the PX8 available for preorder for $549. I’m not sure if the price will change, but if you had your eye on this model, you may want to jump on that deal right away in case the price goes up (I’ll update this post if it does). No ship date is listed, and while the headphones are on Bowers & Wilkins’ site, only the black version seems to be available.

I wish I could say I’ve tried the PX8, which has upgraded drivers from the PX7 S2. Bowers & Wilkins says the PX8 “sets a new reference standard for sound, build and finish in the active noise canceling wireless headphone category.” The headphones have all-new 40mm Carbon Cone drive units that are “inspired” by the Carbon Dome drive units used in the company’s 700 Series loudspeaker line. Bowers & Wilkins says these units help deliver superior resolution, detail and timing with even more accurate sound than the PX7 S2.

At 320 grams, the PX8 weigh a little more than the PX7 S2 (307 grams) but have many of the same specs, including Bluetooth 5.2, 30 hours of battery life and support for Qualcomm’s Adaptive aptX audio codec for devices that support aptX (many Android phones do). Bowers & Wilkins says that aptX Adaptive wireless technology and “powerful digital signal processing” allow the listener to get 24-bit high-resolution sound quality from streaming services like Tidal and Qobuz that offer it.

When paired with an iPhone, the headphones would use the AAC audio codec. For the best sound quality, you’d probably want to go wired — you can also connect to your laptop or desktop computer via USB to get high-resolution sound.

Bowers & Wilkins’ headphones are sturdily built, and the PX8 certainly have an eye-catching design. Based on what we got with the PX7 S2, I expect the PX8 will be comfortable to wear despite being slightly on the heavy side. The significantly lighter Sony WH-1000XM5 are probably the most comfortable of the competing headphones I mentioned above, but Bowers & Wilkins did make some design improvements to the PX7 S2, incorporating better ear pads and trimming down the headphones slightly (they’re more comfortable than their predecessors).

As soon as I get my hands on a review sample of the PX8, I’ll let you know how they sound and if they really do set a new reference standard for Bluetooth headphones. One can only hope for the price.