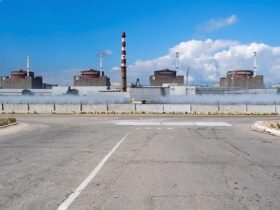 Buffalo Bills cornerback Dane Jackson was taken to hospital with an alarming-looking injury inflicted by a teammate as the Bills continued their strong start to the season with a dominant 41-7 win over the Tennessee Titans.

Jackson suffered the neck injury late in the first half of the Bills’ home game on Monday night. Jackson was lying on the ground with his head up as he tackled the Titans’ Treylon Burks when the 25-year-old’s teammate, Tremaine Edmunds, barrelled in, head first, and missed his intended target. The 6ft 5in, 250lbs linebacker’s helmet slammed into Jackson’s and sharply jerked back his head.

Surrounded by concerned teammates as he was treated by medical staff, Jackson was placed on to a stretcher and an ambulance drove on to the field to take him to hospital. Edmunds was able to continue. The incident silenced a boisterous crowd at the Bills’ home opener, with television cameras showing some fans praying in the stands.

The team said that Jackson was taken to the Erie County Medical Center for a CT scan and X-ray and, in a positive sign, had “full movement in extremities”. Jackson, who hails from Pennsylvania, is in his third season with Buffalo, who picked him in the seventh round of the 2020 draft.

Buffalo led 17-7 at the time. Decibel levels rose again in the second half as wide receiver Stefon Diggs extended the Bills’ advantage with his second touchdown of the game, catching a 46-yard pass from quarterback Josh Allen, who had another impressive performance to add to his collection. Even in mid-September it hardly seems too early to predict that Allen will contend for the league MVP award. Allen finished the night with four touchdowns and no interceptions for 317 passing yards.

Diggs added his third score in the third quarter for a 34-7 advantage before an interception returned for a 43-yard touchdown by Matt Milano turned the contest into a rout, the mood now jubilant in the stands.

The dominant display in the 41-7 victory underlines the Bills’ status as among the leading Super Bowl contenders, especially coming after their curtain-raising 31-10 thumping of the defending champions, the Los Angeles Rams. Sean McDermott’s side are now bookmakers’ clear favourites. The Titans – also anticipated to be one of the strongest sides in the AFC – lost their first game to the New York Giants and sorely need to regroup after a dispiriting night in western New York.

In Monday’s other game, the Philadelphia Eagles went 2-0 for the season after beating the Minnesota Vikings 24-7. Jalen Hurts had a solid night at quarterback, completing 26 of his 31 passes for 333 yards. He threw one touchdown and a late interception, as well as gaining 57 yards on the ground. The Eagles defense gave Kirk Cousins a tough night, picking off the Vikings quarterback three times.