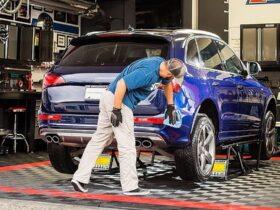 In the lead-up to the final fight on his UFC contract earlier this month, Nate Diaz took aim at Dwayne ‘The Rock’ Johnson over the film star’s recently announced footwear deal with the UFC.

“These shoes fucking suck,” Diaz said while holding up one of Johnson’s Project Rock shoes in front of the camera during an ESPN interview ahead of UFC 279. “Look at these shoes. They made me put this shit on. Fuck these shoes.”

Though Diaz’s comments were cut from the official broadcast, the clip later went viral after being posted anonymously to Twitter. At the time, it served as the only example of a UFC fighter publicly speaking out against the organization’s newest sponsor – a sponsor whose money is unlikely to enrich the athletes putting their bodies on the line in a punishing sport.

In late August, the UFC announced a multi-year partnership with Project Rock, a partnership between Johnson and Under Armour to create co-branded footwear that would be provided to fighters as part of their official kit for bouts. All UFC fighters and corner teams are obligated to wear Project Rock footwear during fight-week events, workouts, as well as during their walk to the octagon.

The partnership was signed in January 2022 and officially commenced at UFC Fight Night: Gane vs. Tiuvasa on 3 September.

“The men and women warriors of UFC compete in their iconic Octagon with pride, purpose, passion, intensity and MANA,” Johnson said in the UFC press release. “Legacy is a very important word to me and our Project Rock is proud to deliver training gear to help support and fuel all UFC athletes who seek to establish their own impactful legacy in UFC and beyond.”

Earlier this month, Project Rock rolled out a new marketing campaign that featured Johnson calling fighters the “hardest workers in the room” while also spotlighting several UFC athletes celebrating the actor’s commitment to the sport.

However, while Johnson may appear to have the respect of some of the organization’s athletes, the Guardian has learned that UFC fighters will not see any of the proceeds from the movie star’s lucrative deal. According to several fighter representatives who had athletes competing at UFC 279 and wished to maintain anonymity due to the sensitive nature of the topic, none of their athletes were paid any additional sums to wear or promote Project Rock footwear.

The Project Rock deal is seemingly incorporated into the UFC’s Promotional Guideline Compliance (PDC) program, where fighters are paid a flat sum on fight week for complying with the organization’s outfitting policies and required promotional duties. The figure depends on the number of fights an athlete has had with the UFC or whether they are a champion or title challenger for a particular event. For UFC 279, the highest payout from the program was $21,000 while the lowest was $4,000 (these payments are separate from the fee they earn for the actual fights).

The contracted pay structure does not change with the addition of new UFC sponsorships, including the UFC’s profitable deals with Venum and Crypto.com: if a fighter was paid $4,000 from the PDC program previously, they will earn the same amount even with the new revenue from the Project Rock deal. However, neither the UFC nor Under Armour would shed light on the extent of the deal.

“We don’t disclose this level of detail on any of our partnerships,” a media spokesperson for Under Armour told the Guardian. “However, we are proud to work with Dwayne Johnson and UFC on providing UA’s performance footwear solutions to UFC fighters.”

It is important to note that the UFC has long been able to maintain a stranglehold over its roster due to the fact that its fighters are independent contractors with no union or association to collectively bargain for their rights.

Unlike the vast majority of sports leagues and organizations, where athletes receive anywhere between 47% to 50% of the sport’s revenue, the UFC has historically paid out between 16% to 19% of revenues to its fighters. In 2019, the promotion reported $900m in revenue, but only 16% was paid out to the UFC’s approximately 600 fighters. This contrasts with the NFL, for example, where two-thirds of the money from jersey sales goes to players.

According to American financial services company Moody’s, the UFC’s revenues from 2021 were over $1bn, with similarly high figures expected in 2022. Despite the UFC’s record-breaking profits, fighter pay remains woefully low.

During a recent marketing campaign, Johnson noted that the “values and foundation of Project Rock … are so aligned with the values and the foundations of UFC, and of the fighters.” However, given the fact that the foundation of the UFC was built on the backs of exploitative labor, it may not be a comparison that Johnson wants to associate himself with.

Though it remains unclear how much say Johnson had in the UFC deal, other fighters have called on the actor – whose industry has multiple unions for professional actors – to fight for a more favorable deal for the athletes he claims to respect.

“Hey brotha @TheRock if you’re a fan of what we do make the deal favorable for the ones modeling your shoe,” UFC lightweight Terrance McKinney tweeted last week. “I get it’s not your fault or your business doin it to us, but show us the love you think you are. Get in our corner and support us.”

The Guardian was unable to reach Johnson’s management for comment. However, it is worth noting that Johnson is represented by Endeavor, which also happens to own the UFC.