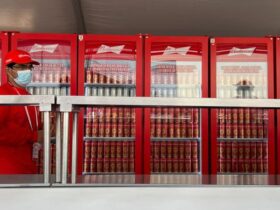 What is Bud Zero, the only beer Budweiser can sell at the World Cup?

This story is part of Focal Point iPhone 2022, CNET’s collection of news, tips and advice around Apple’s most popular product.

Apple is abandoning plans to ramp up production on iPhone 14 models this year due to low demand, according a report from Bloomberg on Tuesday. The company debuted its new series of the flagship phone in September and opened up presales for the iPhone 14, iPhone 14 Plus, iPhone 14 Pro and iPhone 14 Pro Max.

The tech giant reportedly told suppliers to dial back planned increases in manufacturing on the entire product line for the latter half of this year. Instead, Apple aims to make 90 million units during this time period, in line with its original forecast but lopping off a planned production increase of roughly 6 million, Bloomberg reported. Demand is higher for the more expensive iPhone 14 Pro version than the lower-priced model, and one supplier has purportedly changed its production course to focus on Pro models.

All new iPhone 14 phones features camera upgrades and a crash detection feature. The entry-level iPhone 14 and Plus models start at $800 and $900, respectively. The high-end Pro and Pro Max versions come with an A16 bionic chip, crash detection, Dynamic Island, and a starting price of $1,000 for the Pro and $1,100 for the Pro Max.

Apple did not immediately respond to a request for comment.