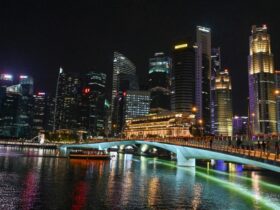 Episode 4 of Star Wars series Andor hit Disney Plus on Wednesday, revealing Rogue One hero Cassian’s next steps into the super-secret rebellion against the totalitarian Galactic Empire after abandoning his family, friends and home in last week’s three-episode premiere. The fourth episode also introduces a familiar face in one of Star Wars’ greatest heroes and a new one in the Imperial threat.

The show takes place five years before 2016 spinoff movie Rogue One, which revealed the events leading into the original Star Wars film, A New Hope. Life in this galaxy kinda sucks in this era, when Emperor Palpatine’s forces are expanding their sphere of influence and enveloping ordinary folk in a vicelike grip.

On the run from the law, Cassian (Diego Luna) escaped with rebel recruiter Luthen Rael (Stellan Skarsgård) for parts unknown. Let’s check out our hero’s new situation, see how the seeds of rebellion are being planted at the heart of galactic power and meet our impeccably tailored baddies. An Empire of SPOILERS awaits.

HYPERSPACE — Luthen continues to be supercool as he convinces Cassian to join the rebel cause, reasoning that he’s already earned a death sentence by stealing from the Empire. The nihilist Cassian reckons fighting the Empire is a waste of time — better to live whatever life you can carve out under that regime.

“You’ll ultimately die fighting these bastards,” the charismatic recruiter says. “So what I’m asking you is this: Wouldn’t you rather give it all at once to something real, than carve off useless pieces until there’s nothing left?”

It’s essentially a repeat of Luthen’s speech back on Ferrix, but Skarsgård is so magnetic that I’d happily watch him riff on this same point a million different ways.

Luthen reveals that he came to Ferrix to recruit Cassian to join a heist on the quarterly payroll for the entire Imperial sector — presumably as a way to bankroll the rebellion while hurting the enemy.

CORUSCANT, THE GALACTIC CAPITAL — A chunk of this episode takes us to the seat of Palpatine’s Empire and introduces the villains of the Imperial Security Bureau, or ISB. This law enforcement and intelligence agency is responsible for keeping the citizenry firmly under the regime’s control, and is generally scary and nasty.

But damn, these people look excellent in their white uniforms. You might recall Orson Krennic from Rogue One dressing in a similar outfit; he’s a director in the ISB-linked Imperial Military Department of Advanced Weapons Research and secretly working on the Death Star at this point in the timeline.

Among the impeccably tailored, and probably the show’s main Imperial baddy, is Supervisor Dedra Meero (Denise Gough). Hearing about the mess the corporate security force made on Ferrix as it tried to catch Cassian, she becomes intrigued even though it’s outside her purview — ultimately suggesting that it hints at an organized rebel effort.

Her snide boss, Major Partagaz (Anton Lesser, whom you might remember playing creepy ex-Maester Qyburn in Game of Thrones), doesn’t think there’s enough evidence and is too focused on maintaining bureaucracy to take a closer look. He pretty much tells her to stay in her lane.

The Imperials do plenty of sneering at each other as they try to climb the ladder — this could be boring, but everyone is so fabulously dressed and the acting is so good that it’s all super engaging.

Did I mention how much I like their uniforms?

On the other side of the coin is Sen. Mon Mothma, whom you might remember from her iconic “Many Bothans died…” speech in Return of the Jedi. Filling the role here is Genevieve O’Reilly, who portrayed the character in Revenge of the Sith (though most of her scenes were deleted), Rogue One, and CGI animated series Rebels.

She’s secretly spearheading the nascent Rebel Alliance and basically the anti-Palpatine. It’s awesome to see her in this paranoid setting — the Empire is clearly onto her, but she’s too prominent to dispose of.

As Luthen returns to Coruscant, he dons a lush curly wig, a fabulous outfit and foppish demeanor as part of his cover — the proprietor of a fancy antique store catering to the capital’s elites. Skarsgård is once again magnificent in this side of the role, and the multilayered performance makes his meeting with Mon a delight to watch. Luthen has clearly been studying space Stanislavski.

They can’t trust Mon’s new driver, so he puts on a big flamboyant show as she enters under the guise of getting a present for her husband. He drops the facade and becomes his intense rebel self only when they’re alone.

She’s struggling to access funds for the rebellion and wants to bring someone new into their tightly controlled inner circle — a risky move, and Luthen isn’t wild about it.

“It’s a daring choice, but I trust you’ll have the courage to turn back if it should be a bit much,” he says, reassuming his persona and hitting us with some tasty subtext.

At Mon’s stunning apartment, we meet her previously unseen husband Perrin Fertha (Alastair Mackenzie). He comes across as a hedonistic jerk, and is probably the perfect cover for her activities (though she’s clearly frustrated with him). It’s possible this is just another act and Perrin is in on the rebellion, but we don’t get any sense of that here.

He’s arranged a fancy dinner for his old army buddy, and Mon notices two high level Imperials among the guests:

She also mentions the planet Ghorman’s shipping lanes being cut off, potentially dooming people to starvation. The Empire will ultimately slaughter innocent protesters on this world, pushing Mon to publicly blame Palpatine and declare open rebellion around three years after this point in the timeline.

Basically, Mon Mothma is surrounded by enemies, can’t trust anyone and it all sounds rather stressful. It’s pretty excellent to watch.

A team of rebels

ALDHANI — Before his trip to Coruscant, Luthen drops Cassian off on this sparsely populated (but rather green and lush) world. The Empire took it over for use as a distribution point in its galactic conquest, messing up the natives’ historic way of life under the guise of employment opportunities.

We’re also introduced to the suspicious rebel team of all-new characters led by Vel Sartha (Faye Marsay), with Imperial Lt. Gorn (Sule Rimi) as their guy on the inside. They’re mostly pretty darn unhappy with having Cassian join the group just days before their heist goes down.

Their target is a massive, fortified Imperial garrison and they have to break into a vault in order to get their hands on the payroll before escaping in a freighter. They’ll use a celestial event as cover, but it’s all pretty darn dangerous.

Cassian is under pressure to catch up in time for the heist and has to pull all-nighters, which reminds me how I used to handle assignment deadlines in my college days, but with way higher stakes here.

Come back for more Easter eggs and observations next Wednesday, Oct. 5, when episode 5 of Andor hits Disney Plus.