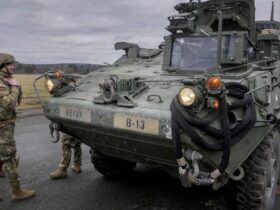 Strykers, Bradleys Likely in Huge US Aid Package for Ukraine

Adnan Syed, subject of the first season of the blockbuster Serial podcast, was released from prison on Monday after a judge vacated his 2000 conviction for the murder of former high school girlfriend Hae Min Lee. Syed, 41, had been serving a life sentence and has maintained his innocence throughout his 23 years behind bars.

The court concluded that the trial was flawed because the state failed to disclose key exculpatory evidence. Prosecutors failed to properly turn over evidence that could have allowed for “substantial and significant probability that the result would have been different,” Baltimore City Circuit Court Judge Melissa Phinn said, according to a report from NBC News.

In Phinn’s ruling, according to NBC News, the judge vacated the murder, kidnapping, robbery and false imprisonment convictions against Syed, and the judge ordered him released without bail. Last week, prosecutors asked that the conviction be vacated and a new trial be set. Prosecutors now have 30 days to decide whether to move forward with a new trial or drop the charges.

Syed’s attorney Erica Suter, an assistant public defender who is also director of the Innocence Project, didn’t immediately respond to a request for comment. The Innocence Project at the University of Baltimore School of Law is a nonprofit dedicated to freeing people it believes have been wrongfully convicted.

Syed was flung into national prominence when he became the subject of the first season of Serial in 2014. The podcast unearthed the case, dug into key details and called into question the case prosecutors made against Syed. The podcast was downloaded over 100 million times and won a Peabody Award. It also led to a 2019 four-part documentary series on HBO titled The Case Against Adnan Syed.

The new episode of Serial will land on Apple Podcasts, Spotify and other podcasting services.