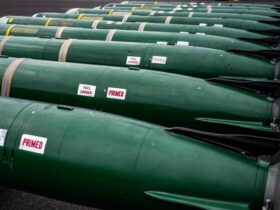 Navy Might Have to Choose Between Arming the Service and Aiding Ukraine Due to Ammo Delays, Officials Say

The European Commission proposal for a global investor court for investor-state dispute settlement (ISDS) – known as the Multilateral Investment Court – threatens to enshrine, expand, and entrench the current system of corporate privilege in future trade deals. A world court for corporations would be the capstone in the architecture of corporate impunity, undermining democratic institutions and lawmaking, and worsening the power imbalance that grants rights, protections, and compensation to corporations at the expense of the public interest.

The world has reached a dangerous crossroads. In one direction, governments possess and exert the fundamental authority and responsibility to protect their citizens, and cooperate with other governments to ensure that multinational companies do not violate human rights or destroy the environment. In the other direction, states grant corporations yet more rights by entrenching the system that allows them to challenge public interest laws and receive compensation when those laws may threaten a corporation’s future profits.

The European Commission proposal for a multilateral mechanism for investor-state dispute settlement (ISDS) – referred to by the Commission as a Multilateral Investment Court – marks the Commission’s decision to follow that second path. The proposed global investor court threatens to lock in the highly controversial ISDS system, an undemocratic scheme that undermines national authority and prioritizes corporate profits above all else.

Securing investor rights and remedies is a core principle of the Commission’s investment policy, and the proposed investor court is just one in a long line of efforts made by the EU to enshrine and expand the current system of corporate privilege, including the Commission’s commitment to include investor rights in future trade agreements and its attempt to include these provisions in other multilateral efforts, such as the World Trade Organization.

As companies grow larger and more powerful, it has become increasingly dif cult for nations to ensure that these companies comply with human rights and environmental laws. A world court for corporations would be the capstone in the architecture of corpo- rate impunity, preventing governments from addressing their more pressing problems – both domestic and global alike – such as violence, climate change, resource depletion, economic instability, and inequality.

The EU’s proposal for a global investor court is a thinly veiled effort to salvage the failing investor-state dispute settlement system by replacing it with a rebranded twin. By ignoring the underlying problems with ISDS as a system, the Commission reveals that it does not view opposition to ISDS as a legitimate concern; the global investor court then becomes merely an attempt to regain political support for investor protections.